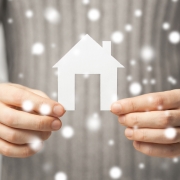 As we head into the cold Scottish winter months, it’s important to prepare your property to protect it from any problems that will lead to void periods or expensive repairs.

New research from Propertymark has revealed that the void time for rental properties has decreased month on month since May 2021 to 2.1 weeks. In addition, the average tenancy time is rising which means that here has never been a more attractive time to be a landlord.

As the market remains fierce, Propertymark is advising landlords to avoid unwanted issues to make it more appealing to tenants.

The more you do now, the more likely you are to save time and money in the winter. Given that the average length of a tenancy is increasing, you are more likely to have a good tenant in situ when not only using a good agent, but ensuring your property is well-maintained.

Here are some tips on how to avoid problems with your rental property this winter:

It’s a good idea to carry out regular maintenance as well as your legal safety obligations.

Bleed your radiators regularly, keep on top of services rather than responding to problems, limit draughts by installing sealing around window frames, under doors and on the letterbox.

Insulating the loft can make a big difference in preserving the heat within your home and lagging the pipes will prevent them from freezing and bursting.

If you have any void periods, make sure you keep the home at an eco temperature if it looks like we are going to experience freezing conditions.

It’s important to maintain the exterior of your property to avoid any expensive repairs. Check and clean all guttering to prevent any blockages and subsequent water damage. Repair any windows and sills and check that the roof doesn’t have any missing tiles.

Maintain the garden area and get it ready for the winter by storing away any furniture and ask your tenants to carry out regular garden tidies to keep on top of it before spring. 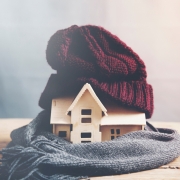 Recent reports indicate that our energy bills are set to rise over the coming months as utility providers look to pass on the rising cost of fuel to its customers.

If you’re renting a flat, it’s difficult to make any major changes to the property to help make it more energy efficient and even simple changes could be in violation of your letting agreement.

If your rental property isn’t energy efficient, you could be spending over the odds to keep it warm during the winter. However, there are some changes you can make that will help to reduce your bills.

Talk to your landlord

Talk to the property owner to find out if there are some upgrades they would be willing to make to improve the energy efficiency – not only will it help to keep your bills down, but it will make it a more attractive rental property in the future should you move on. Make sure you report anything that needs to be taken care of including leaks or faults with appliances that could be causing you to use more gas or electricity – malfunctioning appliances will bump up your energy bill.

If you can, try and turn down your water temperature setting as this can really reduce your costs. If you live in an apartment and can’t access the water heater on your own, ask your landlord or letting agent for help. If you leave for work every day, make sure you aren’t paying to heat an empty home. If you have any control over the type of thermostat, choosing a smart thermostat can allow you to program the temperature in advance so you don’t have to do it manually every day. Making small adjustments to your thermostat can really add up. Finally, cutting back on how long you shower can lower how much electricity your water heater uses. You can also save energy by investing in an energy efficient shower head.

Make sure you’re using LED light bulbs, especially for light fixtures and lamps that you use often. These use up to 90 percent less energy and last 15 times longer than standard bulbs. You can also cut down on energy costs by turning off lights in unused rooms.

Some devices and appliances consume energy even when they aren’t in use – be careful of phone chargers left plugged in and televisions and gaming consoles on standby. Unplug them or use power strips so you can turn everything off at once. If your kitchen is unfurnished, ask your landlord if they would upgrade to energy-efficient appliances – for example a refrigerator with a high energy rating could make a noticeable change to your bills.

If you can, use a low temperature to wash your clothes as this can greatly reduce the electricity usage – in addition do larger loads less often and rather than using a tumble dryer try and line dry. Check wither you are on an Economy tariff as it could be cheaper to use appliances at night.

You won’t be able to replace windows but weather strips are effective in keeping the heat in.

Don’t cover your radiators with clothes that need drying or put furniture in front of them otherwise the heat will be absorbed the airflow restricted.

If you have hardwood, laminate or vinyl flooring use thick rugs to provide additional insulation. 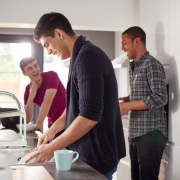 Research carried out by Manor Interiors has revealed that the cost of renting for a student has increased as much as 26% in some areas of the UK but have actually fallen by 2% in Scotland.

Manor Interiors, specialists in built-to-rent furnishing solutions, has found that the average student in Britain pays £132 to rent a student property, reaching £152 in London. However, London and Scotland are the only two regions in the UK where rents have gone down – 16% down in London and 2% in Scotland. In Scotland students now pay an average of £127 per week.

Students in the East Midlands have seen the largest increase, paying an average of £129 per week which is a 26% in crease in just five years. There were also increases in the North West up 20%, Yorkshire and the Humber up 23% and the Humber up 21%.

For students, every penny counts and any rise in rental payments could seem significant and affect where they choose to study. However, this hasn’t dampened the appetite for a university education and a record number of students have looked to secure a place at University this year.

According to a BBC report this week, Scotland is facing a housing emergency driven by a shortage of suitable student accommodation and rising rental costs.

NUS Scotland has issued a warning that unprecedented demand has left some students without any suitable lodgings and have resulted in some students considering dropping out of their university course.

Some landlords have reportedly requested six months rent upfront, while others are waiting until COP26 is over as they can command high short-term rental fees during the climate conference.

With life getting back to normal for students and a return to in-class learning, the housing situation is causing concern for students and the NUS who has revealed that they have never experienced as many requests for support to help people find places to live.

NUS Scotland president Matt Crilly has written to the Scottish government to highlight these concerns and says:

“For many students, particularly those studying in the central belt of Scotland, there is currently a lack of safe and affordable accommodation, with purpose-built student accommodation full, shortages in the private rented sector, and landlords holding off to make a profit from COP26, I am concerned we have a student housing emergency.”

“We are seeing a chronic shortage of private rented accommodation across Scotland, partly as a result of landlords leaving the sector over the past couple of years which has reduced supply. In addition, landlords warned in 2017 that an unintended consequence of the Private Residential Tenancy (PRT) could be a reduction in accommodation available to students as landlords were no longer able to offer fixed-term leases which matched with term times. As a result, properties which landlords would hold back and market specifically for students are now rented by people as their primary home on a longer-term basis. One of the key aims of the PRT has been achieved but it is students who are suffering.”